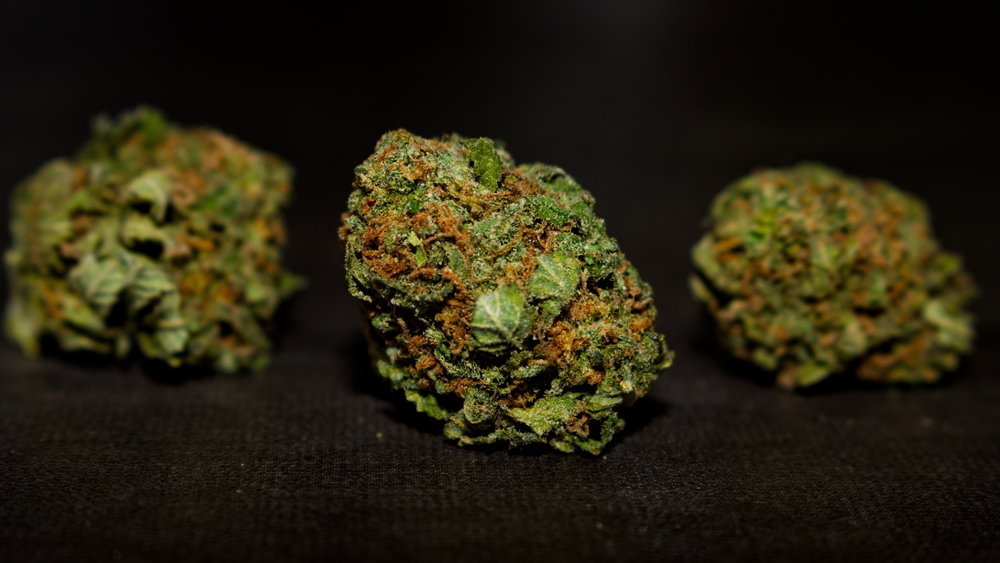 Bubba Kush is an indica-dominant strain with a heavy, tranquilizing high that leaves users feeling relaxed but still functional.  It has a high THC content ranging from 14 percent to 22 percent. Bubba Kush’s lineage isn’t entirely known, but it’s believed to be the result of breeding OG Kush with an unknown indica plant (likely Northern Lights). When it hit the market back in 1996, nobody was concerned with its parentage, as users fell in love with Bubba Kush’s effects and pungent flavor.

The leaves are dark green and sometimes contain shades of purple. Dense trichromes cover the flowers and are even visible when the nuggets are broken open.

Fresh Bubba Kush weed has a mild aroma of coffee or cocoa with some slight fruitiness. When burned, the smoke can be extremely pungent with what some users who’ve written Bubba Kush strain reviews have reported to be an acrid ammonia scent. Most detect chocolate notes and a very “hashy” and spicy scent.

The flavor of Bubba Kush is unique in the cannabis world. The smoke can be very thick and harsh, and will likely induce coughing in even the most experienced smokers. The flavor has been described as dank and earthy with a sweet, peppery kick on exhaling.

No matter what notes an individual smells in Bubba Kush smoke, they all agree that the smoke is extremely thick and pungent. Those users who are concerned about discretion should plan accordingly.

Despite its harsh smoke, the effects of smoking  Bubba Kush weed are surprisingly relaxing. The onset tends to bring some slight disorientation for a few moments. Once this feeling passes, users experience a strongly sedative “body melt” that intensifies as time goes on. This muscle relaxation is usually accompanied by a dreamy euphoria, though mental acuity is still somewhat sharp. Users are functional and alert, and “couch lock” is a rarity.

Bubba Kush is a fantastic sedative for those experiencing physical cramping or pain as well as mental stresses. Anxiety tends to melt away, while leaving users alert enough to have a conversation or get work done around the house. Its narcotic effects make this a strain that’s best suited for nighttime use. Used in higher doses, Bubba Kush effects make it a perfect aid for those suffering from insomnia.

Bubba Kush may be ideal for treating:

Find Out if this strain is for you

Thrive Cannabis Marketplace is proud to carry Bubba Kush in our medical cannabis inventory.  Check out our menus for our Downtown dispensary and cannabis dispensary in North Las Vegas and stop in to try Bubba Kush marijuana strain for yourself.

© 2021 Thrive Cannabis Marketplace
Keep out of reach of children. For use only by adults 21 years of age and older.